Delhi, Hyderabad, Bangalore, Chennai and Goa City Teams with 10 Indian and 10 Foreign Drivers to feature in 4 weekends of pulsating action

The drivers will compete at the wheel of Wolf GB08 Thunder to replicate the winning one-make formula of the Italian Sport Prototypes Championship.

The long-awaited event will feature fast racing circuits and even a street circuit, enthralling audiences on weekends from November 19th to December 11th at Chennai and Hyderabad. The Indian Racing League will be one of its kind Racing League, where male and female drivers will compete against each other on a level playing field with the same ecosystem and machinery.

The league will begin with pre-testing at Madras International Circuit in Chennai on 14th November and is bringing 20 prominent Foreign and Indian drivers to the country for a unique spectacle for racing enthusiasts with four consecutive weekends starting November 19th. The League is also the debut of India's first-ever street circuit in Hyderabad, however, Formula Regional and Formula 4 will be part of the schedule next year due to logistical challenges that came up this year.

Indian Racing League is also set to bring in top motorsports drivers like Neel Jani, a Swiss Indian professional Porsche factory driver who won the 24 Hours of Le Mans in 2016; Oliver "Oli" James Webb, a British auto racing driver and the winner of 2004 Karting Champion, 2007 Formula BMW Scholarship winner and 2014 European Le Man series Champion; Raoul Hyman a South African racing driver and the winner for 2018 F3 Asian Championship; amongst various other elite drivers, as follows. There would be a number of women drivers as well in the Indian Racing League including Nicole Havrda, a young Canadian race car driver emerging in the world of motorsports, she is proven race winner with multiple podium finishes in karting and has taken the next step in her motorsport career, as she competes in Formula 3 in the USA.

Akhilesh Reddy, Director MEIL and Chairman, RPPL (Racing Promotions Pvt Ltd) says, “With the Indian Racing league, we plan to re-establish India as a force to reckon with in the motorsports and to provide young Indian racers with the chance to become global competitors by giving them a chance to succeed directly in their own communities. The Indian Racing League will draw the world racing community to India, which will in turn draw the interest of suppliers and industry stakeholders to the sector. Also, the Indian Racing League will further drive Indian communities to root for their respective cities and strengthen the fraternity of motorsports in India. Racing Promotions envisions the Indian Racing League as a climbing ladder for forming an all-Indian team in F1 and an all-Indian women's squad in F2”.

The Wolf racing team is operating all the competing cars, because of RPPL's unique and innovative idea, both men and women have an equal chance to compete on a fair playing field, with the objective of making India a popular motorsports destination worldwide. With the Indian Racing League only beginning, RPPL aims to establish a solid racing infrastructure in India and begin cultivating top talent from the ground up. 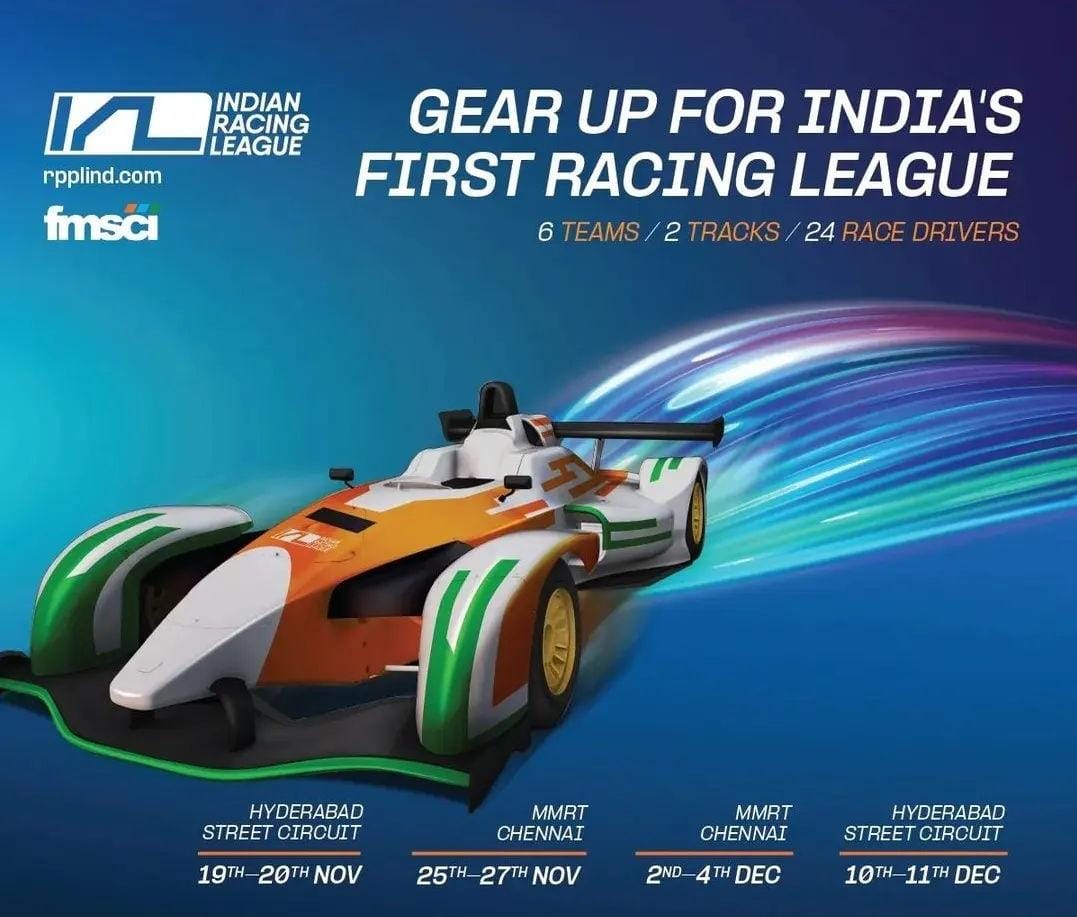